Last week (2-28-12) Seth took Issabella to the doctor. She had been to the doctor three previous times in the last month. She could not seem to get over the "cold" she had. When they went last week, she had to have a chest xray. Seth said it was terrible trying to hold her still to get an xray. Well the xray came back and she had pneumonia in both of her lungs. They admitted her right away to the hospital. Our doctor said if she was not so small he would have let her go home with meds.

Seth called me at school and when your husband calls telling you your daughter is in the hospital it is not a great scene. My students were in the room and I started crying right away. So I talked with my students about what was going on. I think they love Issabella as much as I do. I reassured them that she would be fine.

When I got to the hospital I had to fight back tears. Seeing her in her little hospital gown was hard. She seemed in good spirits and was happy to see me. The nurses came in and put an iv in her hand. She was really good about not moving to much but boy did she cry. My dad was in the hallway and I think it was hard for him to listen to his little grandbaby crying.

The doctor and nurses gave her a steroid and two different antibiotics and fluids. Most of you know we cloth diaper and we were in the middle of potty training. Well nurses wanted to weigh all her diapers and they could not get over the fact that we cloth diaper. Every time the nurse took a diaper to weigh we would say, don't throw it away. So we have seemed to step way back in the potty area and will have to bring that issue back up later with Miss Issabella.

After a long night of breathing treatments every four hours and nurses checking her temp. and IV site every hour. We were glad to have been released and on our way home. I am very thankful it was only a night and even more thankful that I have a wonderful husband. He does most of the doctor visits and stays with her most of the time during the week. 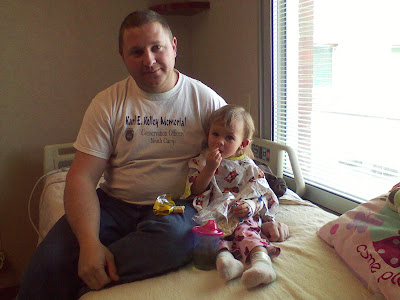 The hospital put a monitor on Issabella's foot for security reasons. We joked she was on house arrest. She kept trying to pull it off. She did manage to get it off once. 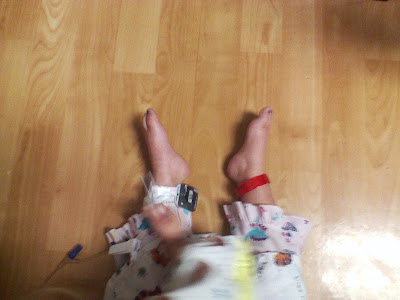 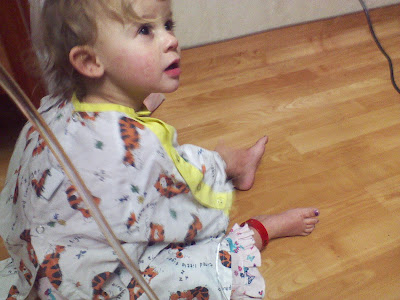 When we left it was like a scene out of a movie. They brought a little wheel chair for Issabella to leave in. She thought it was cool at first then hopped out. All the nurses stood in the hallway as she walked out. I think she brought a smile to their faces. 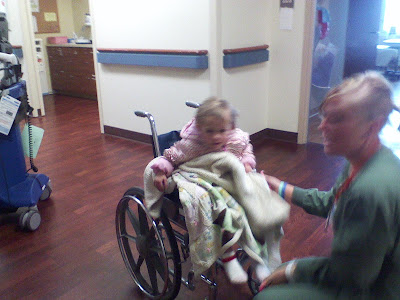 I am happy to say that Issabella went back to the doctor today and he said she is doing wonderful.

Glad to hear she is feeling better!! She is just too cute!

Cami
I am a wife, mother, and teacher. I love all three!